In the next few posts I’m going to outline our current proposed route from Cape Town to Cairo in detail. I’ve divided it into three legs to make it more manageable:

This post will focus on the first leg. Based on our research so far, this seems to be the relatively easy part of the journey.

Currency conversions are rounded up to the nearest Australian dollar. 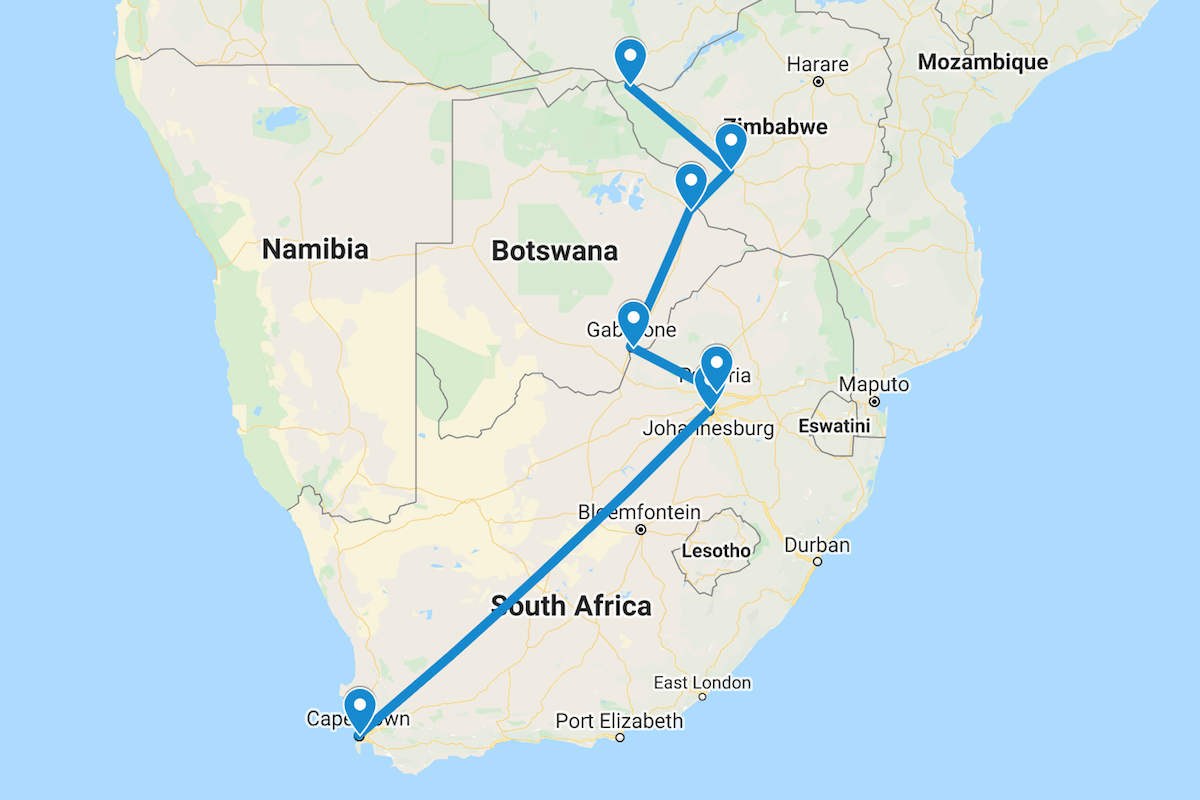 The travel time below obviously doesn’t include our planned stops and necessary waiting times, but the only point where we’d absolutely have to stop overnight would be Pretoria. Theoretically, however, it would be possible to cover the 3,053 kilometres from Cape Town to Victoria Falls within 96 hours.

Because the economy/tourist class train is much cheaper, we’ll probably take that one. The prices below are for a sleeper ticket in a two-berth coupe (tourist-class and Premier Classe, the latter being reportedly twice as spacious as the former).

Gautrain runs a commuter train from Johannesburg Park station to Pretoria every 10–30 minutes (depending on time and day) between 5:30 am and just after 9:00 pm. Fares don’t seem to vary between peak, off-peak and weekend times.

We could stay in Johannesburg instead of Pretoria, but travel advice is generally that Pretoria is a safer place to stay (though how much safer exactly seems to be a matter of debate).

Intercape operates a daily bus from Pretoria (I recall it comes from Johannesburg first) to Gaborone, the capital of Botswana. The ticket price below is for the most expensive ‘full flexi’ ticket that allows cancellations up to 12 hours before departure and changes up to 15 minutes before departure for a 10% fee.

Botswana Railways operates a daily overnight train from Gaborone to Francistown, near the border with Zimbabwe. The price below is for a first-class coupe or compartment sleeper ticket.

Although the Botswana Railways website doesn’t list a train from Francistown to Bulawayo (Zimbabwe), I contacted them and they sent me the schedule. It seems that because it’s not a sleeper, you can’t book tickets online in advance. Apparently the train is rarely if ever busy, so getting a ticket shouldn’t be an issue.

The National Railways of Zimbabwe operates a daily train from Bulawayo to Victoria Falls (both the name of the town and the actual waterfalls nearby), though the actual timetable is difficult to find. Reservations can only be made at the station, and the time of arrival varies due to a number of factors and can reportedly take as long as 15 hours. The price below is for a first-class sleeper ticket based on the most recent prices.