Following on from my previous post, the route we’re planning on taking from Cape Town to Cairo will see us continue from Victoria Falls in Zimbabwe through Zambia, to the coast of Tanzania, and on to Moyale, northern Kenya.

This leg of the journey — the second leg — involves fairly reliable public transport, but the services are typically less frequent than the daily links of the first leg. In some cases this may mean waiting a few days for connections, although regular buses seem available for most destinations as an alternative to trains (according to various websites). 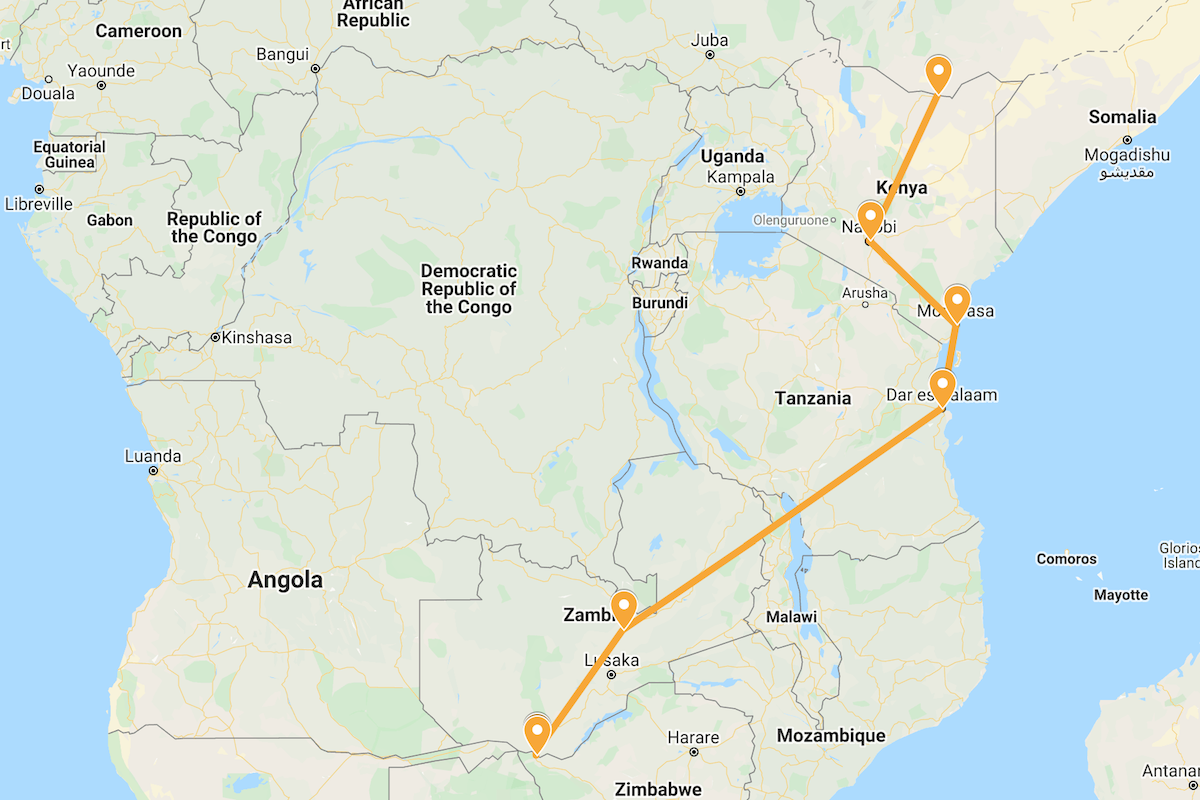 Because there are some variances in time and cost, I’ve included the most expensive and slowest trip to give a ‘worst case scenario’ indication.

The train across the iconic Zambezi River bridge no longer operates, but it is only a short distance between the train stations in Victoria Falls (Zimbabwe) and Livingstone (Zambia). Our intention is to walk across the bridge to the Zambian immigration building (up to four kilometres), then get a taxi the rest of the way. I’m not sure how much a taxi would cost, but I can’t imagine it would be more than the equivalent of AU $5.00.

Zambia Railways’ train to Kapiri Mposhi departs from Livingstone twice a week (ultimately bound for Kitwe). The maximum time between the trains is four days (which we could split between Victoria Falls and Livingstone if necessary). The website is not particularly helpful (many of the links are to blank pages), but I found the timetable and Seat61 gives an indication of the fares. The price below is for a first-class ticket in a three-berth sleeper.

The onward Tanzania & Zambia Railway Authority (TAZARA) train departs from Kapiri Mposhi New Station twice per week, meaning we’ll have to spend three nights there before we can continue our journey. This isn’t necessarily a problem, as it gives us an opportunity to take a break from travelling, and ensures we’ll get our tickets for the onward train (although it is advised to make reservations at least two weeks in advance, first-class tickets don’t seem to sell out as rapidly).

The journey to Dar es Salaam on the coast of Tanzania is very long, and crosses a timezone (Central African Time to East African Time), for which I’ve compensated in the travel time. There are two trains: an ordinary train departing Friday afternoons, and an express train departing Tuesday afternoons. The prices below are for a first-class ticket in a four-berth sleeper.

It’s worth adding here that we are contemplating a significant detour involving a ferry down Lake Tanganyika. This would involve breaking the Kapiri Mposhi-Dar es Salaam journey at Kasama, then taking a bus to Mpulungu, the lake’s southernmost port (Juldan Motors operates a daily bus). The MV Liemba is a ferry that runs every two weeks between Mpulungu and Kigoma (in neighbouring Tanzania) on the northernmost end, but it is often taken out of service for long periods of time. Once off the ferry, trains run four times a week from Kigoma to Dar es Salaam.

This would be much more scenic and adventurous than staying on the train, but we’re leaning against it on the basis that it could delay our journey by as much as two weeks, the ferry might not even be running at the time, and obtaining reliable information is extremely difficult. Nevertheless, if it’s feasible, we might do it.

While in Dar es Salaam, we’ll want to visit the island of Zanzibar. Azam Marine operates a ferry five times daily between Dar es Salaam and Zanzibar that takes two hours and costs USD 35 ($55) each way.

Modern Coast operates a daily bus between Dar es Salaam and Mombasa, across the border in Kenya. The price below is for the ‘VIP’ ticket.

It is also possible to hop from Zanzibar to Pemba Island further up the coast using the daily Azam Marine ferry, and then take a weekly ferry from Pemba to Tanga, and join the Modern Coast bus for the rest of the way to Mombasa. This is heavily dependent on timing due to the limited ferry between Pemba and Tanga. If we arrive on a Sunday it means spreading out the week between Dar es Salaam, Zanzibar, Pemba and Tanga, slowing us down significantly.

Kenya Railways operates a new high-speed rail link between Mombasa and the Kenyan capital of Nairobi, with both an all-stops and express train. The fares below are for first-class tickets, but a very comfortable-looking economy-class ticket can be bought for a third of the price. Bookings can be made online, in contrast to many of the previous trips.

From Nairobi we head north to the Ethiopian border. Moyale is the name of two settlements, one on either side of the border. The Kenyan Moyale is smaller, and most advice is that if you have to stay the night, you should try to do so on the Ethiopian side. Both Mabruk Classic and Moyale Liner operate daily buses from Nairobi to the border.