The third and final leg of our planned overland journey from Cape Town to Cairo involves passing through Ethiopia, Sudan and Egypt. This is where things become difficult.

The first leg (South Africa, Botswana and Zimbabwe) will be relatively easy, with regular trains and buses linking our checkpoints and information readily available online. The second leg (Zambia, Tanzania and Kenya) sees the regularity of services and reliability of information drop, but still has a high level of confidence.

But the final leg is something else. Details on public transport in Ethiopia and Sudan are incredibly vague, and often the advice given is to simply ‘get a bus’ with the premise that one will be available. I’ve reached out to a few people via Lonely Planet who could help us get through these countries. Egypt, on the other hand, will be easy. 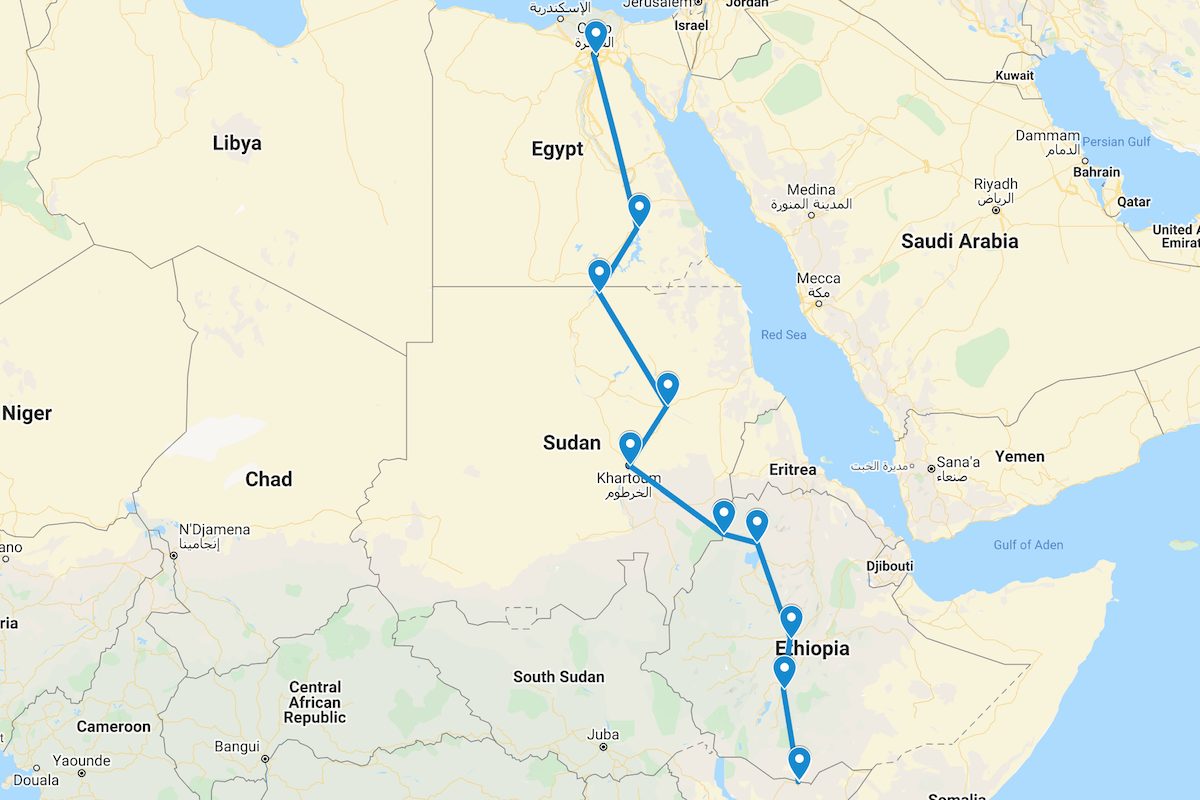 Moyale is a small town on the Kenya-Ethiopia border, although it has been described as two towns separated by the border. The travel advice is generally to stay the night, if necessary, on the larger Ethiopian side rather than the smaller Kenyan side. We’ll be arriving in the early morning and will most likely be too late to get a bus, so we’ll have to stay at least one night. I don’t know where the bus stops on either side of the border are, but Google Maps indicates a walk of not more than three kilometres.

Getting from Moyale to Awassa (also transcribed as Awasa and Hawassa) could be a challenge as the information available online doesn’t come from official sources. Buses reportedly run from Moyale to Awassa, but also to Dila (75 kilometres to the south) or Shashamane (35 kilometres to the north) and even all the way to Addis Ababa, the capital (with an overnight stop in one of those three towns). We want to get to Awassa because that’s where a seemingly reliable bus service connects to Addis Ababa, but we’ll probably have to play this by ear.

Road travel in Ethiopia is apparently prohibited after dark, which means buses tend to depart close to dawn and try to reach their destinations before sunset. Ethiopia also has the distinction of using its own method of counting time, consisting of a daytime cycle that begins at dawn (‘12:00’) and ends at dusk (‘11:59’), and a nighttime cycle covering the next 12 hours. This shouldn’t cause too many problems, but it means asking for clarification about whether Ethiopian or ‘international’ time is being used.

I’ve had to estimate the time and fare based on various sources on the Internet.

Sky Bus Ethiopia operates a daily bus from Awassa to Addis Ababa. Although it only takes about four hours, it still leaves early in the morning. On the plus side, it arrives in Addis Ababa in time for lunch.

Sky Bus Ethiopia also operates a daily bus from Addis Ababa to Gondar in the country’s northwest. I think the company is based in Addis Ababa because the lack of buses to the Kenyan and Sudanese borders indicates these are too far to make in a single day with the sunset curfew. The time below includes, I believe, at least one break for lunch (whereas Moyale–Addis Ababa would be 13 hours without breaks).

We’ll have to stay overnight in Gondar due to the curfew, but that’s fine as we’ll probably want to stay a day or two in ‘the Camelot of Africa’, known for its castles. Daily buses and minibuses reportedly depart from Gondar for Metema, near the border with Sudan. Although it should be doable in a few hours, some travellers report that it can take five hours or longer to travel less than 200 kilometres.

It’s a short walk from Metema to the tiny village of Gallabat across the Sudanese border. According to other travellers, this crossing isn’t too busy, so we should have a relatively easy time dealing with Sudanese immigration and customs. It’s advised that we don’t hang around the border (particular in Metema), so the sooner we cross and are on our way the better.

Gallabat to Khartoum (Bus or Buses)

Sudan Railways reportedly operates a daily train between Khartoum and Atbara, a major town about some 300 kilometres north of Khartoum. Unfortunately the railways’ website does not load. This train used to continue on to our next destination, Wadi Halfa, but has apparently been out of service for several years. The train takes the better part of the day to make the journey, so we might take a bus from Khartoum to Wadi Halfa (either via or bypassing Atbara).

Again, this is a trip that might require multiple buses, but many travellers claim to have made the journey from Atbara to Wadi Halfa, on the southern end of the manmade Lake Nubia-Lake Nasser system, in one or two buses. This is the last town before the Egyptian border.

A ferry departs from Wadi Halfa and makes its way down the Lake Nubia-Lake Nasser system to Aswan. The schedule for this ferry is unclear: it either departs once a week on Monday or Wednesday afternoon, or twice a week on those days, or possibly on Tuesday or Thursday, any any combination of those. I’ve asked on the Lonely Planet forums for up-to-date information and am waiting to hear back.

The hope is that we’ll be able to take the ferry to Aswan as soon as possible (Wadi Halfa is quite small), as it will be good to relax in a cabin after so many buses. However, there are also apparently daily buses (which may or may not include Friday) that go from Wadi Halfa into Egypt, across a ferry at Abu Simbel, and on to Aswan. Given I want to visit Abu Simbel anyway, this might be a viable alternative if we miss the Aswan ferry.

Once in Egypt, everything gets nice and easy again, with Egyptian National Railways operating a tourist-accessible train from Aswan to Cairo (via Luxor and others) four times a day. Tourists are restricted to the more expensive trains (ostensibly for safety reasons), but there are ways around the restriction by buying a ticket from a machine or on the train, which bypasses any refusal to sell. I’ve included the first class prices for the tourist trains below, however.