Undoubtedly the fastest overland route from Cape Town to Cairo is driving through East Africa. The total distance is about 10,100 km and would take around 160 hours non-stop. Assuming we could drive 12 hours per day (optimistically), it could be done in around 14 days.

There are problems with this idea, however.

The first problem is that while my brother is keen on driving, I am not. I think being at the mercy of public transport schedules will lead to a much more vibrant and sympathetic experience, be more relaxing in some regards, and reduce the need to take breaks.

The second problem is the cost. Public transport is relatively cheap in East Africa, whereas we would most likely have to buy a suitable vehicle in South Africa and find a way to dispose of it in Egypt (or more likely Sudan). Hiring a car doesn’t seem to be an option because (a) no sane hire car company would agree, because (b) no sane insurance company would insure it.

The third problem is that the fastest route would take us through South Sudan — a very unstable country that I want to avoid. We can detour around South Sudan, but that significantly reduces the advantage of driving in terms of efficiency.

So far I’m winning the argument.

Although the Cape Town to Cairo railway envisaged by Cecil Rhodes was never completed, much of East Africa is still linked by rail. Where there are no trains, we can take buses and ferries.

I’ll put up a more detailed proposed route when it is more or less finalised, but for now we seem to be settling on a route through South Africa, Botswana, Zimbabwe, Zambia, Tanzania, Kenya, Ethiopia, Sudan and Egypt. 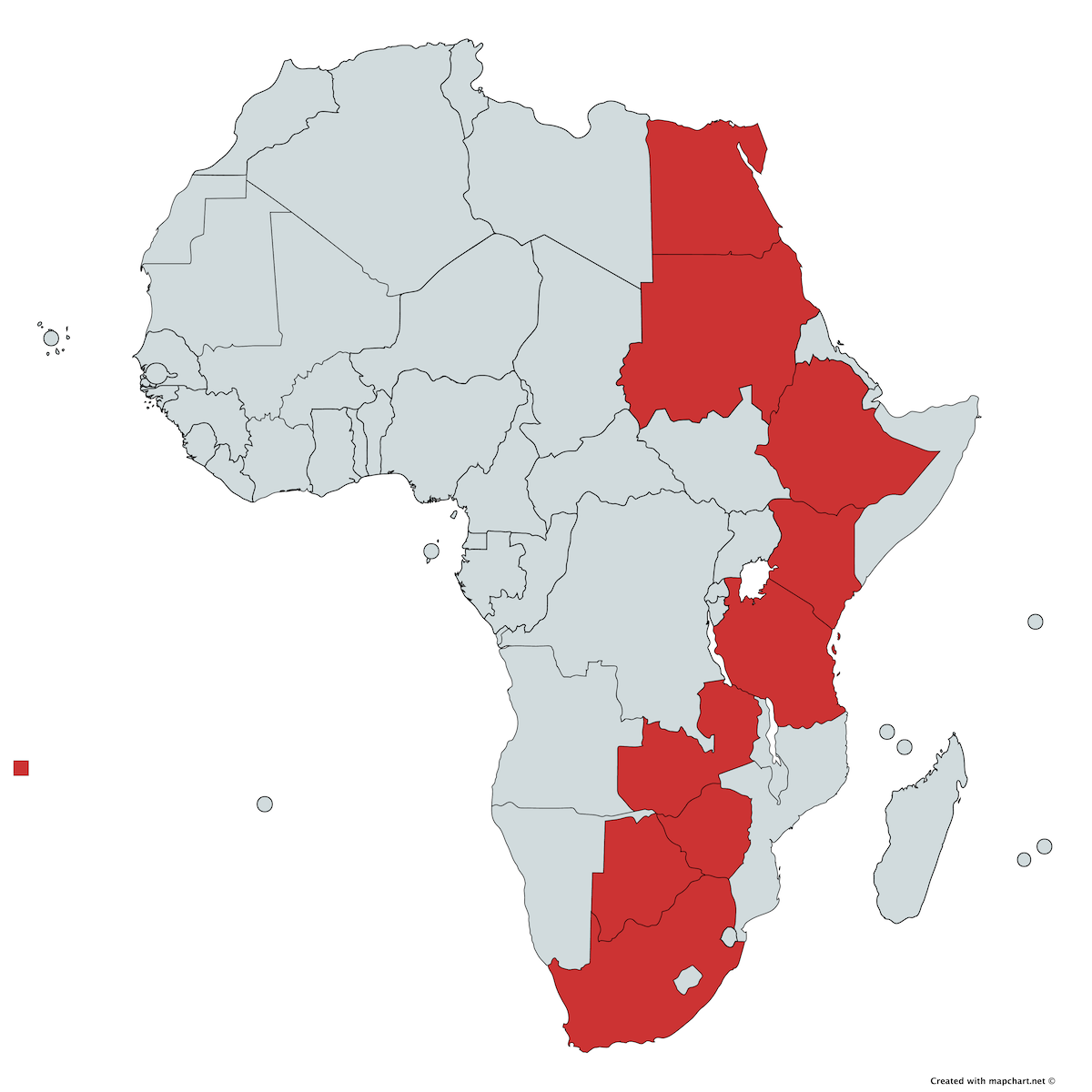 Most of these countries were former British colonies, through which the Cape Town to Cairo railway would have passed. Ethiopia is the exception, being a former Italian colony, and Kenya was not part of the planned railway.

The railway would have passed through Uganda and South Sudan, but we’ll head slightly east through Kenya and Ethiopia instead due to the above-mentioned security concerns. The official advice is not to travel to South Sudan, border areas with South Sudan (including the Uganda-South Sudan border) or the south and western half of southern Sudan.

We’ve tried to give preference to trains over buses because they are generally more comfortable and more spacious. Fortunately, buses link many of our destinations so that in the event that we miss a train or if a train is cancelled, there are fallback options.

The hardest part is working out where to break journeys. For example, getting from Cape Town to Johannesburg (and then Pretoria) is relatively straightforward, with a train departing three times a week. However, stopping anywhere along the way adds 48–72 hours to the trip. The train stops at Worcester, Beaufort West, De Aar, Kimberley and Klerkdorp. I don’t know where is worth stopping, if at all (though Kimberley seems worthwhile).

This obviously reveals that I’ve not really researched much about the country, and that’s entirely true. I’ve been so preoccupied with determining a feasible route that I haven’t taken the time to work out where to stop on the way.

So, Joseph and I have started that process now and hopefully we’ll get it done by the middle of the year. He’s starting with South Africa, and I’m starting with Egypt. Whomever gets to the middle first will do Tanzania. Then we’ll swap over, to avoid unnecessarily doubling up.